More than meets the eye with this mega-talented guitarist

When I was requested to interview Robyn Ferguson by her jack-of-all-trades manager David Devo Oosthuizen, I’ll shamefully admit that I had not personally heard of Robyn or her music up to that point. However, I was quite excited at the opportunity to interview an artist that was new to me because I felt like it was a great opportunity to broaden my musical horizons and see the bigger picture of what this amazing SA music scene has to offer. And sure enough, I was blown away listening to Robyn’s technically skillful and emotionally charged music for the first time, and was equally humbled after chatting to her about it and learning so much from her.

Robyn’s obsession with guitar has been an active part of her live for over half of it. She has played guitar and sung in bands such as Adorned In Ash and Sistas of Metal over the years, and many people on the scene have come to know her from these projects. Furthermore, Robyn has played locally and internationally alongside some of the world’s biggest metal acts such as Periphery, Norma Jean, Epica, Sepultura, Cannibal Corpse, to name a few, and has received numerous awards for her playing and music. This goes to show that she is a top class musician at the top of her game on the band front. However, the decision to embark on a solo career in 2019 with the release of her first solo EP, “Alizarin”, was viewed by Robyn as a personal challenge to see how the world would receive her own music and if she could make it on her own. Feeling that the music she had written did not fit with any of her other musical projects, she decided to record and release it under her own name. And the response was overwhelmingly positive, hence proving that people had only just heard the beginning of Robyn Ferguson, the solo artist.

One of the most striking things about Robyn other than her amazing guitar skills and abilities is how full of wisdom, positivity and motivation she is. Throughout my awesome chat with her, – be sure to listen to the podcast above! – I couldn’t help but feel inspired by her “can do” attitude towards life and music, and the idea that dreams are only worth chasing if they absolutely terrify you. Listening to her music, you feel a strong sense of freedom, liberation and release – as though every note is a reflection of Robyn’s soul and emotions in each song. It seems that a lot of her outlook on life and her own music has been shaped by her most recent life experiences that pushed her to breaking point and caused her to bounce back with tenfold strength and determination. 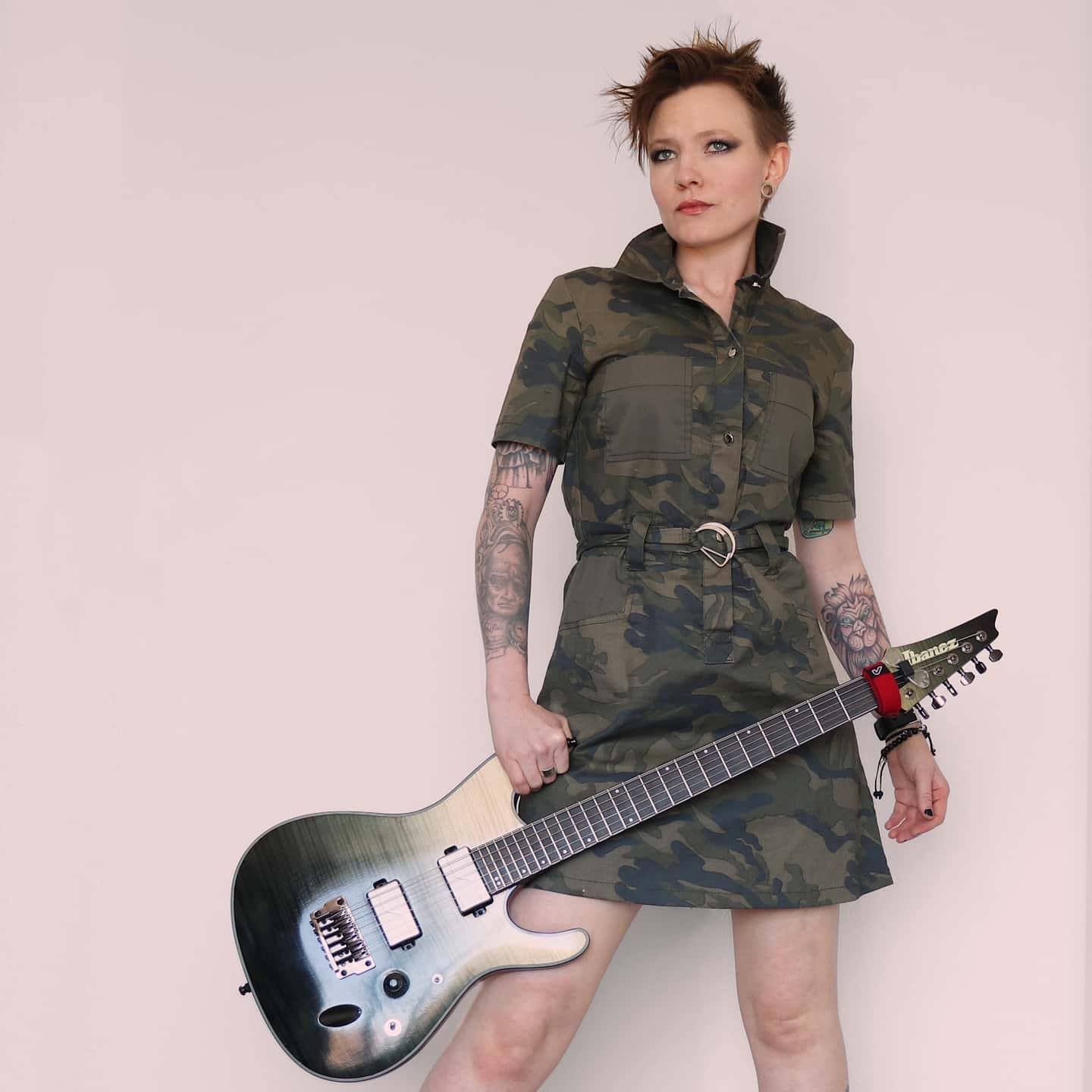 A true warrior: Robyn dressed for battle and wielding one of her favourite Ibanez axes.
Photo credits: Robyn Ferguson UGC. 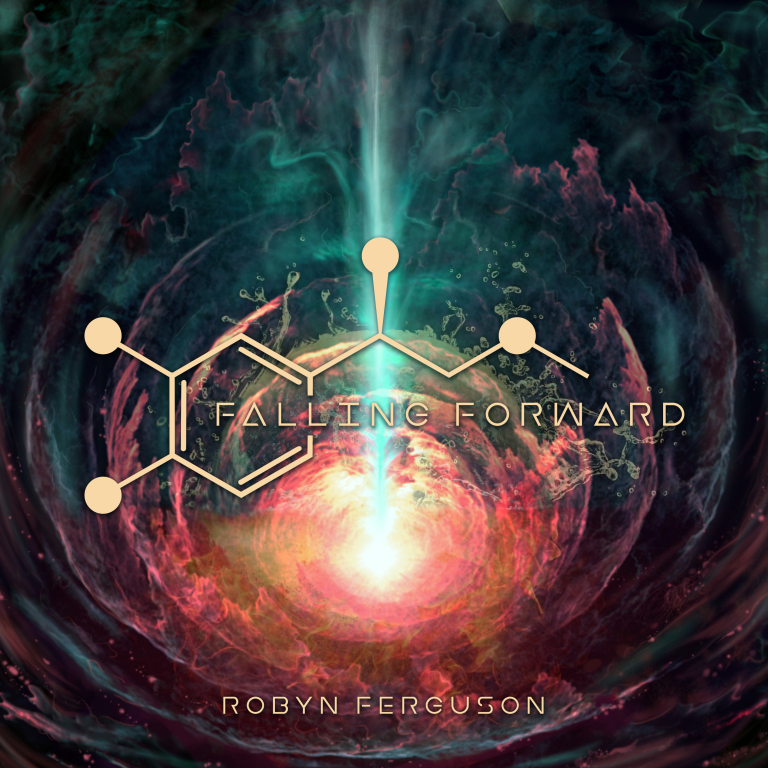 The past year has not been an easy one for Robyn by any stretch. In short, her recent struggles with a degenerative neurotransmitter disease took a huge toll on her physical, mental and spiritual health overall. The disease caused paralysis and nerve damage in parts of Robyn’s body, and three out of her five fingers on her fretting hand have lost feeling. Thankfully, she did not lose mobility in the fingers and, through extensive rehabilitation and intense practice, would still be able to play guitar – but no doubt, being unable to feel the fretboard with your fingers sounds like a nightmare for any guitarist. Through extreme perseverance and determination, Robyn began to play again and started writing entirely new music that reflected her experiences with these unbelievably challenging personal struggles. This led to the creation of her second solo studio release, “Falling Forward”, which dropped on 1 May 2020 to huge local and international acclaim.

Robyn describes the feeling of creating this EP as “something that I needed to do”, using music as a way to push forward and overcome the dark period in her life. She drew a lot of inspiration not only from her real world struggles, but also from really abstract dreams she was having at the time during her recovery. In each of the six instrumental songs on this EP, she clearly expresses every ounce of emotion felt on her journey through her guitar, as though it were an extension of herself. No note is out of place – each and every sound has an essential purpose that helps tell the story without a single word being uttered. You can feel her pain, her anguish, her inner turmoil – but also her serenity, her calmness, her desire to find peace and happiness amidst the chaos. Robyn’s hope for anybody who listens to her music is that it helps them overcome their struggles and inner demons the same way it helped her overcome hers.

What makes “Falling Forward” even more mindblowing is the fact that she also wrote, recorded and programmed/played the parts for every instrument on it! This makes “Falling Forward” a solo EP in the most literal sense and makes it even more spectacular that she wrote and recorded all of these songs completely by herself at home while recovering from illness. The songs are also brought to life by the amazing mixing and production of Clint Watts, who Robyn has been friends and collaborated with for many years through her various musical projects and first solo EP. His tight and cohesive production gives the songs the right amount of punch they need to match whatever emotion Robyn is trying to convey. I look forward to hearing more music coming from this collaboration as Robyn’s solo career continues to progress!

When you hear how well-crafted and technically skilled the songs on “Falling Forward” are, you would think that it were played by someone who had total feeling in both hands and who hadn’t suffered a year of life-altering illness if you didn’t know Robyn’s story beforehand. But that’s testament to Robyn’s tenacity and strong character proving that no matter how hard life may get, we can do anything we set our minds to – something I think not only musicians but people in general can learn from her. Her raw talent is coupled with her humility and gratefulness for every ounce of support and success she has received along the way, and she has an extremely loyal team and fanbase backing her and will ride the wave with her no matter what.

In a sense, I personally draw parallels between Robyn and Tony Iommi – the Godfather of Metal and riff maestro of Black Sabbath – for the similar ways that they perservered to play the guitar and write incredible music despite the challenging physical limitations inflicted upon their fretting hand (if you don’t know the legendary story of what happened to Tony’s fingers and how it shaped the birth of metal, read about it here). Despite their situations not being entirely the same, it’s nonetheless difficult to not be able to feel parts of your hand when playing guitar (plus the fact that they both play metal is sheer coincidence!) But being crazy and determined enough to work around those limitations and play as though you had a perfectly normal fretting hand makes you an inspiration to all guitarists and musicians alike, and for that, I salute you Robyn!

Another amazing feat for Robyn is that she is the ONLY official endorsee for Ibanez South Africa, and she has been loyal to the brand since getting her first guitar at age 12. She currently uses two Ibanez Iron Labels and one Ibanez Axion Label, switching between them for various tones and sounds. The combination of these guitars with her beloved Kemper make for some incredibly punchy and personal tones that can be heard all over her solo work. To hear Robyn talk about what an instrument endorsement entails, how she sets up her tones for recording and live, and the interesting name she has for her guitars, you’ll just have to listen to the podcast! To see Robyn play one of her Ibanez guitars through her Kemper while hearing her amazing tones, be sure to watch the video on this page of her performing a playthrough of her song “The Timebender” from her first solo EP – and go check out her awesome YouTube channel at the link below too!

Check out Robyn on her social media pages at the buttons below: