We Interviewed One of the Best Alternative Rock Bands in SA, Scarlotte Will

We Interviewed One of the Best Alternative Rock Bands in SA, Scarlotte Will

For those of you who don’t already know, Scarlotte Will is a supergroup made up of musicians from various bands. The band has been together for almost 6 years. They joined forces from all corners of Gauteng, each member having different tastes in music, ranging from Alternative Rock and Metal to Punk Rock and Blues etc. Their first gig was at Railways Cafe, opening for Tidal Waves back in 2014, after having rehearsed songs for approximately 6 months.

Listen to the Scarlotte Will interview here:

The band members comprise of:

Chatting about the song: “In-between”

Since this is one of my favourite tracks, I simply had to ask the guys about it. As it turns out, Tristan initially came up with the idea of the hammer-ons on the open E string, which would later become the iconic riff that pulls the entire song together. He claims he generally has these ideas that would often go nowhere; however, he eventually brought it to the other members’ attention to work it into a song. We can all breathe a sigh of relief that Tristan did not let this riff fall into the ether of the music realm, never to be recovered again, since this led to a masterpiece of a song indeed! To all of you readers out there that haven’t listened to this song yet, click here to listen to it straight away!

The name of the song is derived from quite an interesting meaning for the band. Since it is the first song of the second EP it sits in-between the first and second EP – bridging the gap between the old and the new, so to speak.

The meaning behind the lyrics, as Tristan explains it, has to do with the feeling you get when you’re in-between decisions in your life. We never truly know whether our decisions are good or bad for us until they truly materialise. I’m sure we can all relate to this; it certainly rings true to me. 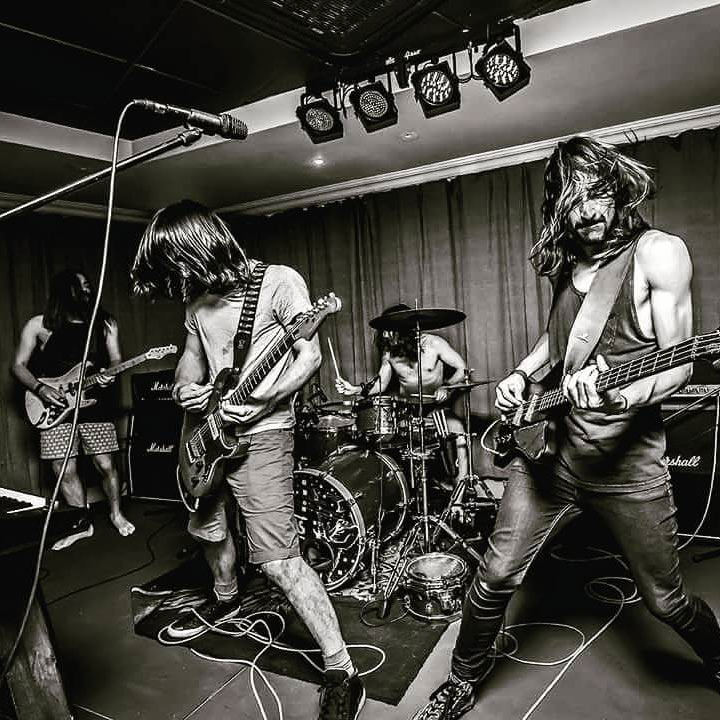 A day in the life of…


What do the guys get up to in everyday life? When you listen to their music you envision the group living a rockstar lifestyle in a mansion somewhere, devoting every waking hour to their music. But these guys live very ordinary lives, believe it or not.

Tristan is currently studying towards a degree in physics and chemistry. As he explains, the band will always be as important as anything else he does in his life, always parallel to life itself. Xan is studying his masters in biostatistics. His plan is to eventually work from home and have a studio at home. Not too bad hey? Sounds like the dream… Hugene works in HR at a gold mine and uses all his free time after hours and on weekends to jam in Scarlotte Will amongst other bands that he is a part of. He also uses his paid leave for touring with the band. Bez is quite lucky in that he teaches music during the day and jams in his down time. He did his music grades in high school and studied sound engineering at the Academy of Sound Engineering in Jo’burg after school. He also started learning videography last year.

Each of the guys also have quite a few extra musical projects on the side. Hugene explained that he is in another band called “Punkfontein”, and Tristan is actually the drummer for this band. Hugene taking a break. We can only imagine it was well deserved. Photo credit: Henry Engelbrecht.


Every musician/band has had their fair share of shitty gigs. It came as quite a surprise to me that Scarlotte Will was asked to cut their set short for being too loud at a bike rally… doesn’t make any sense, right? Listen to the podcast episode to hear them tell the full story.

Musical influences and where it all started

Tristan started playing piano at the age of 9, learning your typical classical music, but soon got bored of it. He grew up on bands like Red Hot Chili Peppers, Queens of the Stone Age and Muse, amongst other bands. Bez started playing guitar at the age of 7. He also went to music lessons, learning classical songs. He eventually started learning Metallica riffs, and soon found himself playing guitar in a metal band. He later went back to his roots of the more classical type of music he learned to play when he was very young, which matured into Jazz and Blues.

Xan grew up on The Offspring, Blink-182 and Sum 41, later getting into heavier bands such as Underoath and From First To Last. For this, his friends apparently criticized his music taste to be juvenile. He later got into Indie bands like Menomena, The Strokes and Ramona Falls which he says influenced his drumming a lot. Lately he likes to listen to: “Trance, Synth Wave and anything weird”. Hugene grew up listening to punk rock bands like Simple Plan and Bowling For Soup. When he discovered Fokofpolisiekar, he got drawn into the local music scene in a big way.

Tools of the trade


If you’ve listened to my interviews before, you’d know that I always make a point of asking the guitarists in the band about their gear. It’s around this point in the interview that Bez really started joining the conversation…. or should I say, take it over!

Bez says he likes the Strat-vibes, although he has never owned a Fender before. He has always had cheap knock-off Strats with upgraded pickups to “try and mod that thing to the max”. He also owns a 7-string. Interestingly, the song called “Drop A Bomb” is actually named after his 7-string’s low B string being tuned down to an A. Meaning, Drop A tuning sounding like a bomb!

He plays a 15 watt Ibanez Tube Screamer head and cab, which he has taken to JP Le Roux in Krugersdorp about 3 or 4 times already for some crazy cool mods. Coincidentally, Tristan actually plays a custom Le Roux amp.

Bez is a huge fan of Electro-Harmonix effects pedals. He uses an Electro-Harmonix Holy Grail Plus reverb pedal, which has an awesome “flanger-reverb” type of effect built into it. This effect can be heard distnctly in the song “Intelligently Stupid”. He also has the Electro-Harmonix Memory Boy Deluxe analog delay pedal with tap tempo. For a sweet blues overdrive effect, he uses Benjamin Craig’s Zirconia Overdrive by Craig Amps. Of course, he has an old USA Big Muff pedal in his collection, but this one comes with a story attached to it – you’ll have to listen to the podcast episode to get the details on that one. Check out Scarlotte Will on their social media pages at the buttons below: