Bona-fide leader of The Nation

It only takes one glance at Zakk Styles to know that he was quite literally born to rock. And that’s before you even sit down and chat to the guy! Since quitting his day job five years ago to chase his rock ‘n roll destiny, Zakk and his band mates in Black Bone Nation have been on a mission to revitalise hard rock music not only in South Africa, but the world over!

For his first ever interview as a journalist for SA Guitarist, Matt Nijland sat down with Zakk for a two-part interview about the history of the band, their future touring plans, and all about their latest full-length hard rock escapade, “Born To Rock”.

Listen to Zakk’s interview about the band here

Black Bone Nation is a rock ‘n roll freight train five years in the making, and it shows no sign of slowing down or stopping any time soon! The band was originally formed in 2015 while Zakk was still living in Cape Town (initially, a very different band to what we know today), and after deciding to quit his day job to pursue the band professionally, he moved up to Gauteng to find new band mates after assuming front man duties for the band. After going through numerous lineup changes, the Nation was finally solidified, with Zakk, Leroux, Henry and Brendan taking up axes and drumsticks to make rock ‘n roll history. The mission was clear – write hair-raising melodic and infectious riffs that perfectly blend the band’s blues rock and metal influences , and conquer the world! 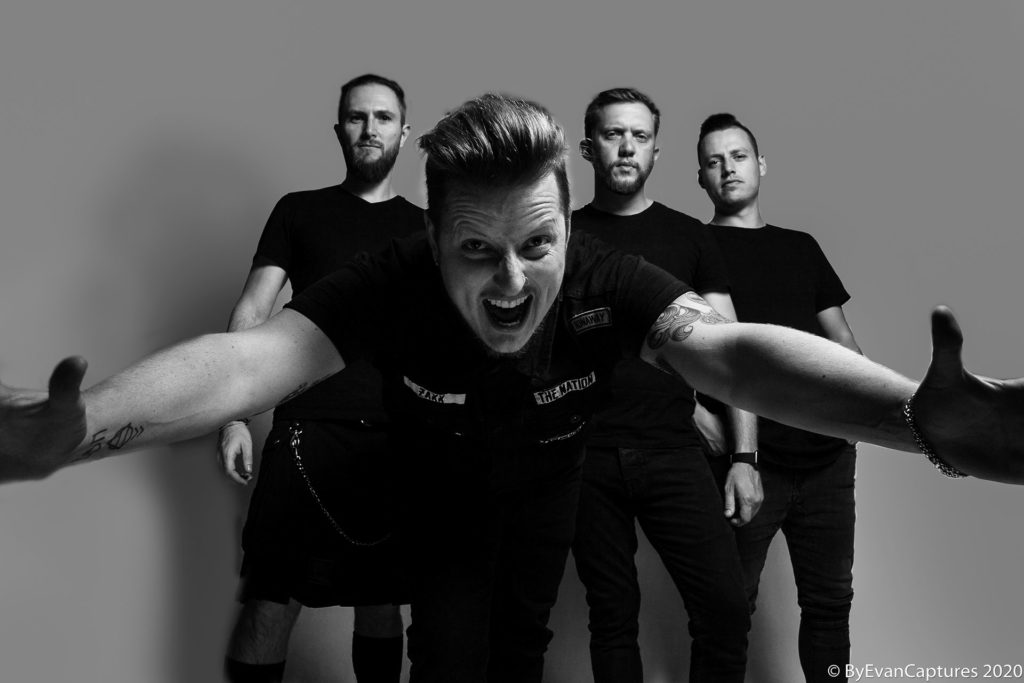 The band has released a rather hefty discography over the past exactly two years! Their first release is the three-track covers EP “Pride and Glory”, consisting of three songs that have deeply influenced the band, and received critical praise. Their second, self-titled five-track EP of all-original music was released in March 2018. It was so positively received that Banks Radio Australia awarded them the 2017 “Single of the Year” award for their first hit single “Backseat Lover” (released in 2017), and ultimately earned them the station’s “EP Album of the Year” award in 2018. Their latest release, “Born To Rock”, is discussed at length in the podcast and album review below.

When the band’s name hits your eardrums like a Marshall stack cranked to 11, its easy to envision what this band is all about: earth-shattering guitars, grooving and super tight bass and drums, infectious rock ‘n roll riffs, pyrotechnics, bright lights, beer (they even have their own brand – Black Bone Lager!), sweat, dancing… you name it – its basically one hell of a party from beginning to end! They don’t call themselves “the loudest band in SA” for nothing!

After supporting other legendary South African artists throughout 2018 such as WONDERboom, Fokofpolisiekar and Jack Parrow, Black Bone Nation have been making serious waves internationally. Last year, they were signed to Painted Bass Records in the Netherlands (which their latest album has been released by), and a European tour was subsequently organised. The tour, scheduled for March and April this year, has unfortunately been postponed due to the worldwide COVID-19 pandemic, but hopefully they will be rocking the Northern Hemisphere very soon once the tour is rescheduled!

Check out Black Bone Nation on their social media pages at the buttons below:

Listen to Zakk’s interview about “Born To Rock” here 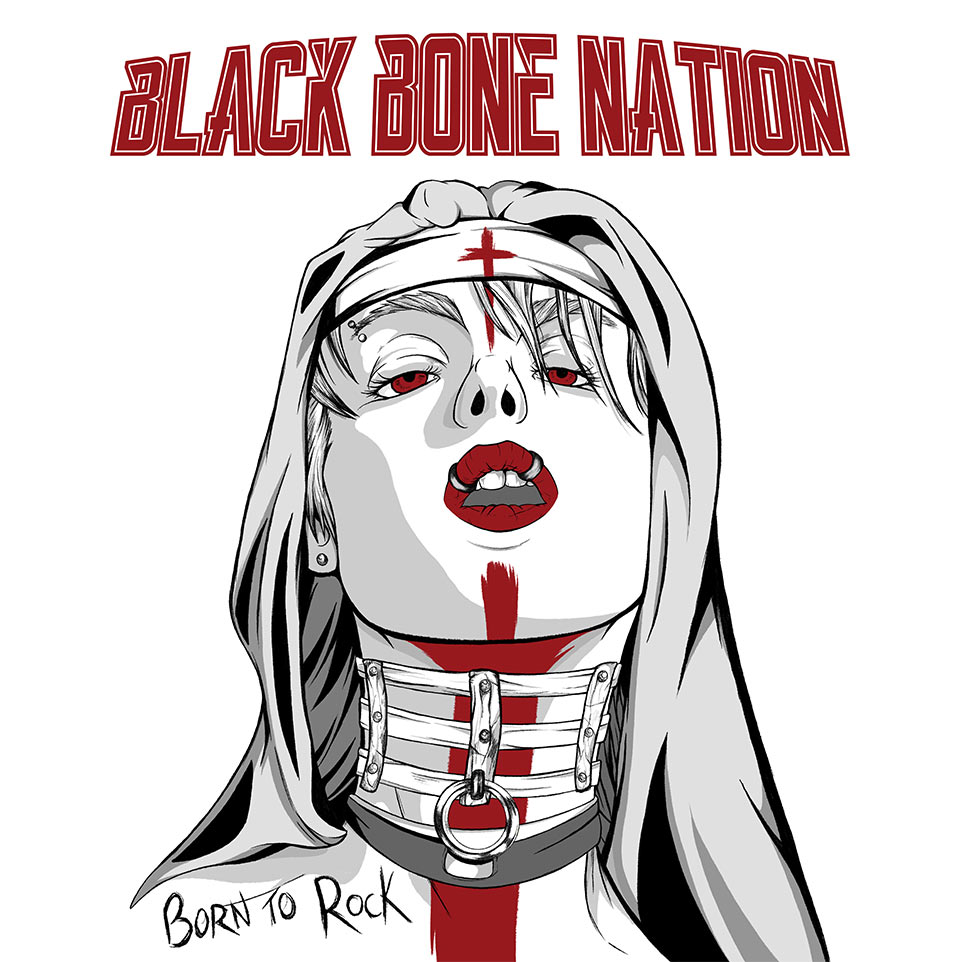 Black Bone Nation’s latest full-length release, “Born To Rock”, was officially fully released a few days ago on the 26th of March, but it had been making a significant impact even before then.

At the time of writing this article, the album’s lead single “Born To Rock” is already charting at number 8 on the Clip Hard Rock Chart on Kovsie 97.0 FM (and at the time of publishing, it has already climbed to number 6), with chart co-host Christi Olivier describing it as “strong AC/DC vibes that she really hopes catches on here in South Africa”. Their third single off the album, “Here I Am”, is simultaneously charting at number 2 on the Banks Radio Australia Top 15. Their music video for “Born To Rock” (check it out on this page) has already racked up over 1200 views since its release on 21 February. These are all signs that the world has been longing for this follow-up original release of the band’s for quite some time now – and the fans are loving it!

I was lucky enough to have an early pre-release listen to the album before interviewing Zakk, and I was very impressed, firstly, with the amazing production quality. The production partnership of Zakk with Stevie Bester (one of the best sound engineers and producers in SA in my opinion – my band 3’s and 7’s also had the privilege of working with him) really paid off well. The crisp, clean production makes each song stand out as really anthemic, powerful and in your face – the way good old fashioned rock ‘n roll should be! Local producers working on international releases for local bands really is testament to the enormous amount of talent the South African music scene has and how it deserves so much international accreditation.

Secondly, I very much enjoyed the songwriting and guitar work on the album. Zakk and the boys delivered on exactly what they promise to do – melt our faces and burst our eardrums with tasty riffs, wah-laden solos and hooky choruses that we can sing along to! My favourite riffs on the album are definitely “Born To Rock” (epic signature title track – again, be sure to check out their just as awesome music video for the song), “Here I Am” (not only is the riff really infectious, but listen out for Zakk’s mind-blowing vocal delivery in the choruses!) and “All For Tomorrow” (I personally got a strong early Smashing Pumpkins vibe from it which, though not apparently intentional at all by the band, made my lingering teenage angst quiver with delight).

As I mentioned, there are a few surprises on the album. The first being the piano- based rock ballad “Million Miles”, which was not only unexpected for a Black Bone Nation album and song in general, but also amazing because Zakk actually bought himself a piano just to learn how to play it for the record! (Listen to the second podcast above for the full story) Another surprise, and another favourite song of mine on the album, is the twangy, country-Western acoustic-based track “Magic Man”, which gave me some R.E.M. acoustic vibes with a darker, heavier edge (anyone who knows me knows I am OBSESSED with R.E.M., so saying something reminds me of that band is one of the highest musical compliments you can get from me). I also really enjoyed how the band weren’t afraid to experiment with instrumental tracks on the album, and the closing track, “Deaf Forever”, really stood out for me with the way the song gets increasingly layered with catchy guitar harmonies – a hard rock orchestra!

Overall, this album is really exciting, cohesive, well-produced, and deserves every bit of the local and international credit it’s getting. Well done boys, and I’m very excited to see what the future holds for Black Bone Nation! Be sure to steam the album on all major streaming platforms (you can find all the links under the album cover above).